Between point A
and point B

The following story was originally published in Benji Knewman 4.

In my 28 years I still feel young. Except for scars and tattoos, my body has not changed at all. The change is all in my head. At the age of 18, I thought that I should exercise, lift weights, go to tanning salons. Ten years ago, it was guys like that who seemed attractive. For a couple of years, I was a diligent visitor to a weight room, but not so much for myself – mostly for others. So that they’d find me attractive. 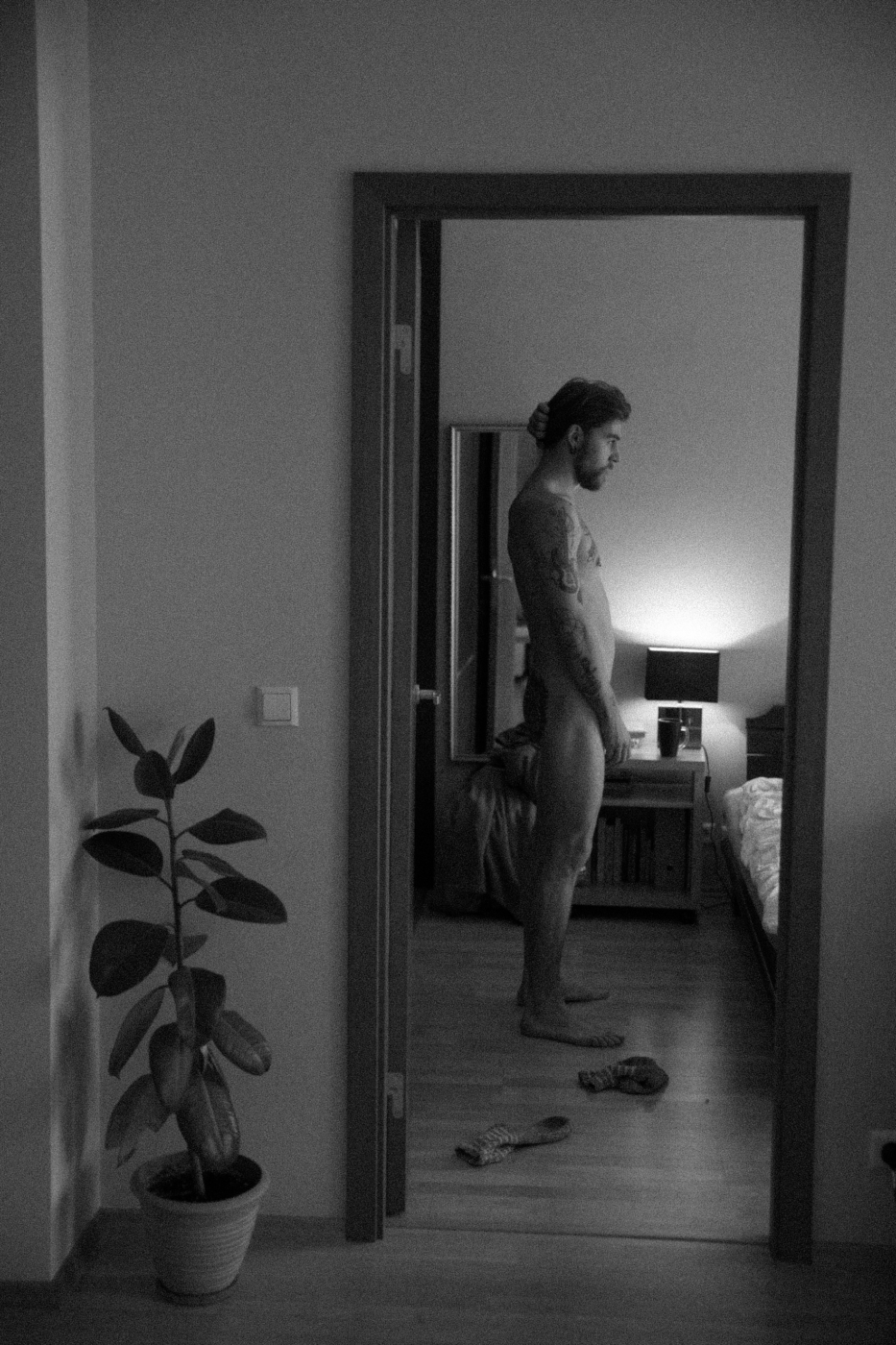 On a hot summer’s day, all red, sweaty and with a stupid look on my face, I was lifting weights.

Looking at the mirrored wall of the club, I suddenly had the thought: What in the world am I doing here? What for?

For several years, I had been telling myself that I’m doing it for the sport of it, but in fact it was all for my looks. If it was for the sport – I could ride a bicycle, run, I could play some game! Not long afterwards, I began boxing. That weight-lifting session was never completed.

Even if you are young yourself, old age is right there beside you – parents, grandparents. Lately, I’ve caught myself thinking that they’ve actually begun to die. I’m lucky: I still have both sets of grandparents, but a friend of mine lost his grandpa a month ago. He was a boxing coach, in excellent shape – didn’t drink, didn’t smoke. A blood vessel burst and he was suddenly gone. That’s how it happens sometimes. 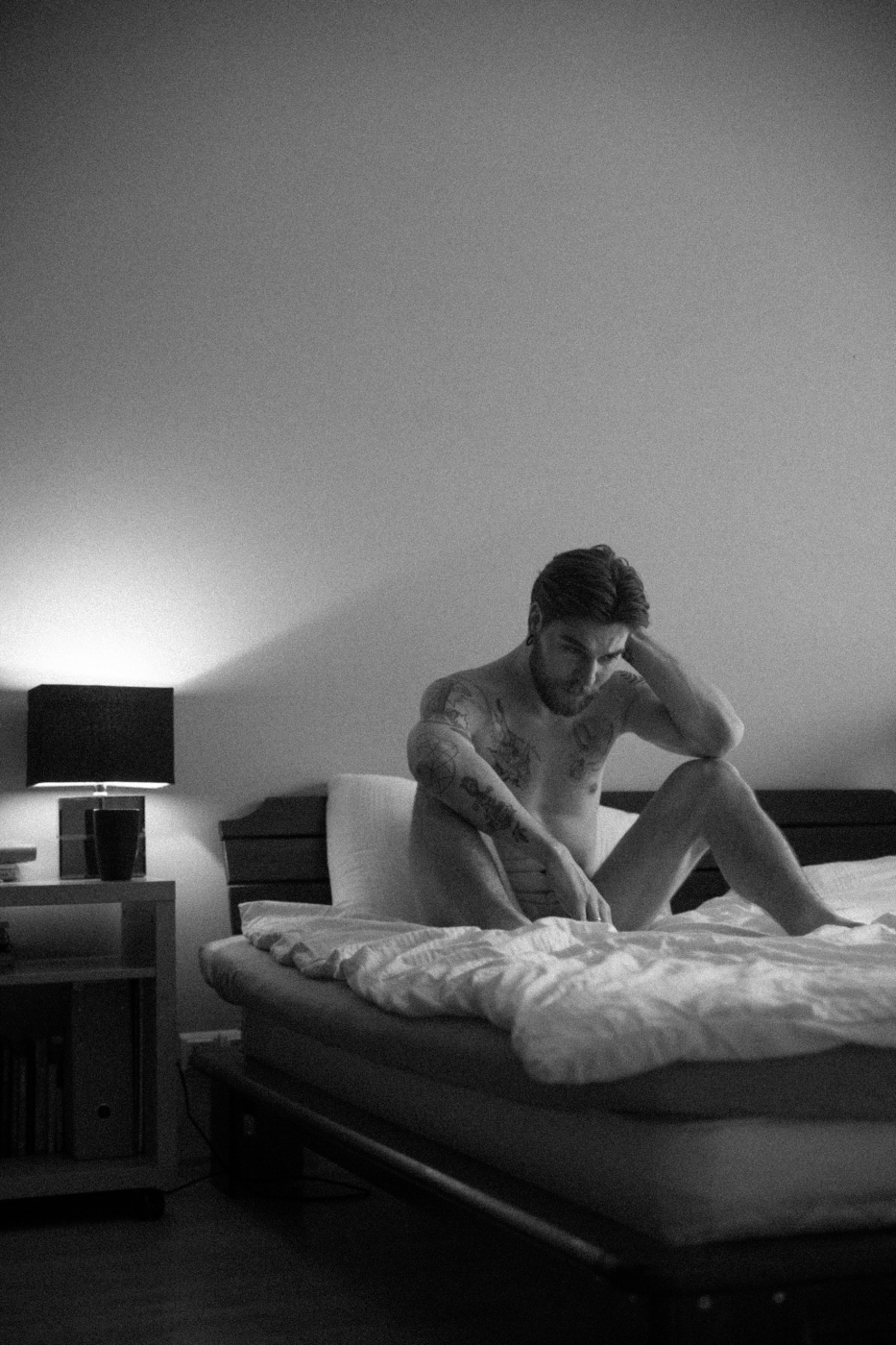 This event brought home to me that I shouldn’t wait – I should visit my grandparents now. They are prime examples of how one’s body ages. A few years ago, they didn’t find it difficult to get into a car, but now their legs no longer serve them as before and they have to miss big family events. I see them much more rarely than in my childhood. Every time we see each other, I pay particular attention to the visual traces of ageing.

My grandpa is 84. He is my oldest grandparent. When my father was born, grandpa gave up smoking. He is really crazy. He still does sports. True, his running is no more than slow jogging, but he has his own schedule and he keeps to it. In the summer he swims and plays ping-pong in his yard in Ķengarags with mystical local Russian characters, on a table he built himself. I’m sure – had he not been born in the Soviet Union, he would have been a hippie.

There are men who at the age of 50 do not look a day over 30. They are really deserving of admiration. My friend’s old man is like that. Sports are at the root of it. He began doing sports in his youth and continued for 20-30 years. He has fathered four sons. He’s been married several times, but that’s not important. I would love to look and live like him when I’m fifty – ride motorcycles, bicycles and jet skis and drive at rallies. He had organized his life so that he would have the time and means for it now. When he gets on a jet ski in the summer – helmet on his head, no shirt – no one would think he was as old as fifty.

I compare my body with the bodies of other men in magazines. With time, some of the body parts change, so I pay special attention to them in the pictures.

There are a few small things in my body that go unnoticed by others but I hate them. For instance, my fingernail that I sliced through with a piece of sheet metal when putting the roof on the house. Twice I went to a surgeon to pull the nail, hoping that it would heal, but the root was irreversibly damaged. Since then I try to not show that finger while working at the bar.

I’ve always wanted a broader chest. It’s an inferiority complex I developed since the moment I began to turn into a man from the thin, boyish stalk that I was, and my T-shirts no longer hung from me like sheets. My muscles began developing much later than other guys’ and for quite some time I remained thin like a blade of grass. Yet I yearned to turn manlier sooner.

Nowadays, I only spend as much time on my body as necessary. Work, family, son. There is no time for exercising. Yet I keep thinking about it, because at the age of 50, I would like to go bicycling with my adult son or to go snowboarding and remain fit and active. Not just buy some cool equipment and pretend to be something once a year but to do things for real.

I’ve shaped a kind of attitude towards life where death is one of the components. I’ve been living with this model for several years – it brings me solace and warmth. It all began with a book that I later wanted to give to one of my grandmothers to read, but she only managed half of it and gave it back. Catholic to the bone, she claimed that she could not read it, otherwise she would have to scratch out all 77 years of her life and everything she had believed up to that point.

The book deals with life after death. I really wanted grandma to read it, for the book gave me peace and I thought that it would help her feel better as well. At that age, a person tends to steer dinner conversation toward where she or he should be buried. But in that book, death is not the end. There’s this guy, Robert Monroe – he died in 1995. He studied ways in which the human brain could continue working during one’s sleep, thus prolonging the day. Quite by accident, Robert hit upon the topic of astral projections or out-of-body experiences and taught it at his institute to others as well.

You put your body to sleep, but your mind remains alert and continues to work – you might as well learn a new language or something!

He took the scientific approach, establishing that we are all part of all encompassing energy that chooses which moment to stop circling the earth and descend and be born. And then be born again after death. Monroe himself had supposedly lived 396 times already. Imagine what your life might be like if you really have no fear of death because you’ve already been there.

People fear death precisely because it’s something cold, dark and unknown. Yet old age is what they fear more, for they will no longer be in the shape they once were. In addition to the fact that most of your friends and relatives will be dead, someone will have to take care of you. Yet if you know that this is but a journey between point A and point B – just one of the stops – then you might even enjoy your old age.