In one frying pan

When in the countryside, it is important not to use too many dishes.

The following story was originally published in Benji Knewman 1.

Just the two of us in the countryside kitchen. With animals in the attic.

In the background: deep, dense sounds of grunting and thudding can be heard from the cockloft, the attic, and the walls.

– Can you hear it again?

– Rats in the middle of the woods? I don’t think so.

– That mink that’s beaten the path to the pond?

– It’s unlikely that a mink would sneak up the cockloft.

As it is late, the fire outside has been put out, and a saucepan is heating on the gas oven. When in the countryside, it is important not to use too many dishes, and it’s wiser to cook either outside on the fire, or at least try to use the same pan again. Planning is key.

Start with the stock. First, stew some tomatoes (cut into halves, place with the cut side facing up) on a low, low fire. Even if the tomatoes get a little burned on the bottom, their skin serves as a little cup. In the end, some salt and pepper can be added, but if the tomato is a good one, that’d be unnecessary. Drizzle a little olive oil onto the same pan, grind some black pepper, add a finely chopped clove of garlic and some rosemary leaves (or pine needles, as kids call them, disgusted). Stew it all, allowing all the smells and flavours to mix with the oil, then throw in the lamb fillet pieces with the bone. It is important to brown the meat on both sides, but keep it pinkish in the middle. That comes with practice.

The shop and the market are far away, so it is vital to plan the next meal – to avoid getting hungry or wasting anything. Latvian butchers are rather ham-handed and cubbish, so pieces of meat often have a lot of extra bits on them. The lamb fillets were not an exception, so do cut all the extra bits off, and use them for the so-called “small soup” the next day. 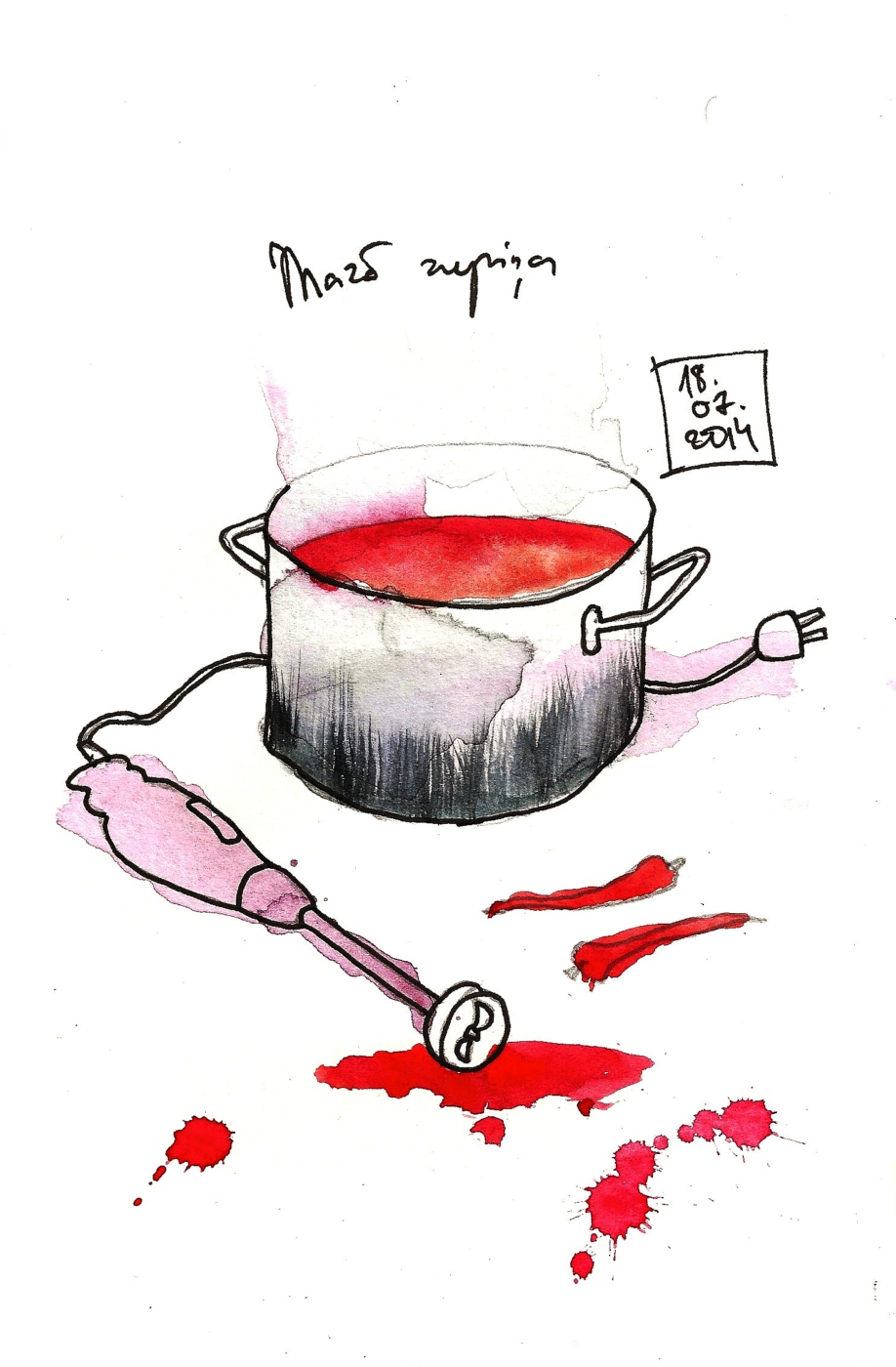 In the background: deep, dense sounds of grunting and thudding can be heard from the cockloft, the attic, and the walls. Sounds of barking join in.

– The hunter said that this is the puppy season. There’ll be one or more.

– Indeed, for some reason they call them puppies. And if the mother were to get shot now, the puppies, most likely, would starve to death and start to stink.

– Even if they wouldn’t stink, I don’t like the thought of that.

– Inga is on Facebook. She thinks it’s some kind of stone mink.

– I think it’s a forest mink. Did you know that it’s related to wolverines?

Use the saucepan to make the “small soup”. Fry the leftovers of the lamb, pour in the tomato juice, add some fresh tomatoes, one celery stick, onion, one-half of a garlic clove, and a wee bit of chili pepper. I had a bit of pumpkin in there too.

Add a few bay leaves, a teaspoon of black peppercorns, a couple of aromatic peppers, and some salt. Boil it for a while, and then remove the bones and bay leaves. Use the blender to mix it all together. Add a fried leek, but before that, add some pre-boiled, butter-fried bean pods (cut into 1-2 cm pieces). It’s important to achieve the contrast of mild/delicate and rich flavours in the soup.

Before the “small soup”, we had a starter. It was beetroot, cut into thin slices, and on each slice was a piece of smoked butterfish. It was finished with some sprinkles of cumin seeds and a few drops of lemon juice. 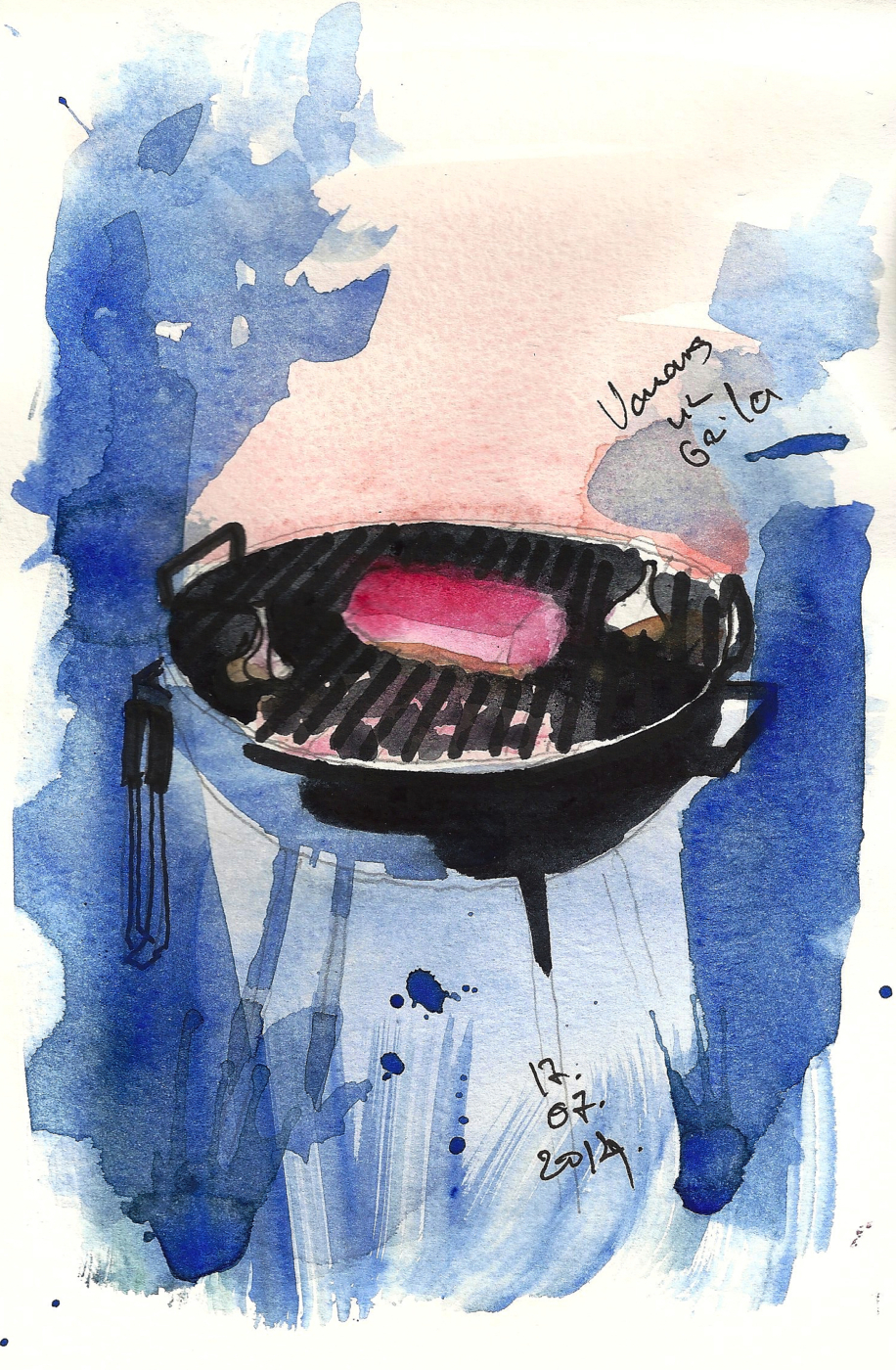 The sun has hidden itself behind the house already. On the roof, some scratching noises can be heard. An animal runs up a tree trunk, and the coals in the grill have just been lit. The beast stops and stares me in the eyes.

– Listen, come and have a look at what we’re doing here.

Take the meat out of the fridge at least 2 hours before cooking it. This is very important.

We had a fillet of beef. I had rubbed it with some pepper earlier. Salt is not needed yet; it’d just drain the moisture. While the meat is getting hot on the coals, prep the extra stuff. In a small pan, fry a couple of finely cut bacon rashers, add a few chopped garlic cloves and a couple handfuls of chanterelles (uncut and approximately same-sized). Let it all brown, then add a tablespoon of balsamic vinegar and some salt. Meanwhile, the flames would have gone down. Put the meat (as one piece) on the griddle and let it burn on all (four) sides. Wrap it in foil, and melt a piece of butter on the same griddle pan. When the butter starts to bubble, unwrap the meat, cut into finger-sized strips and fry it in the butter for just a moment (the length of “a moment” depends how rare, medium rare, or well-done you want the meat to be).

At the last minute I had an idea to make a sauce using raspberries, as everyone was too lazy to eat them raw. Pour a bit of water and cooking oil into the saucepan, add the raspberries, grind in some black pepper, and throw in some thyme and a chopped garlic clove. 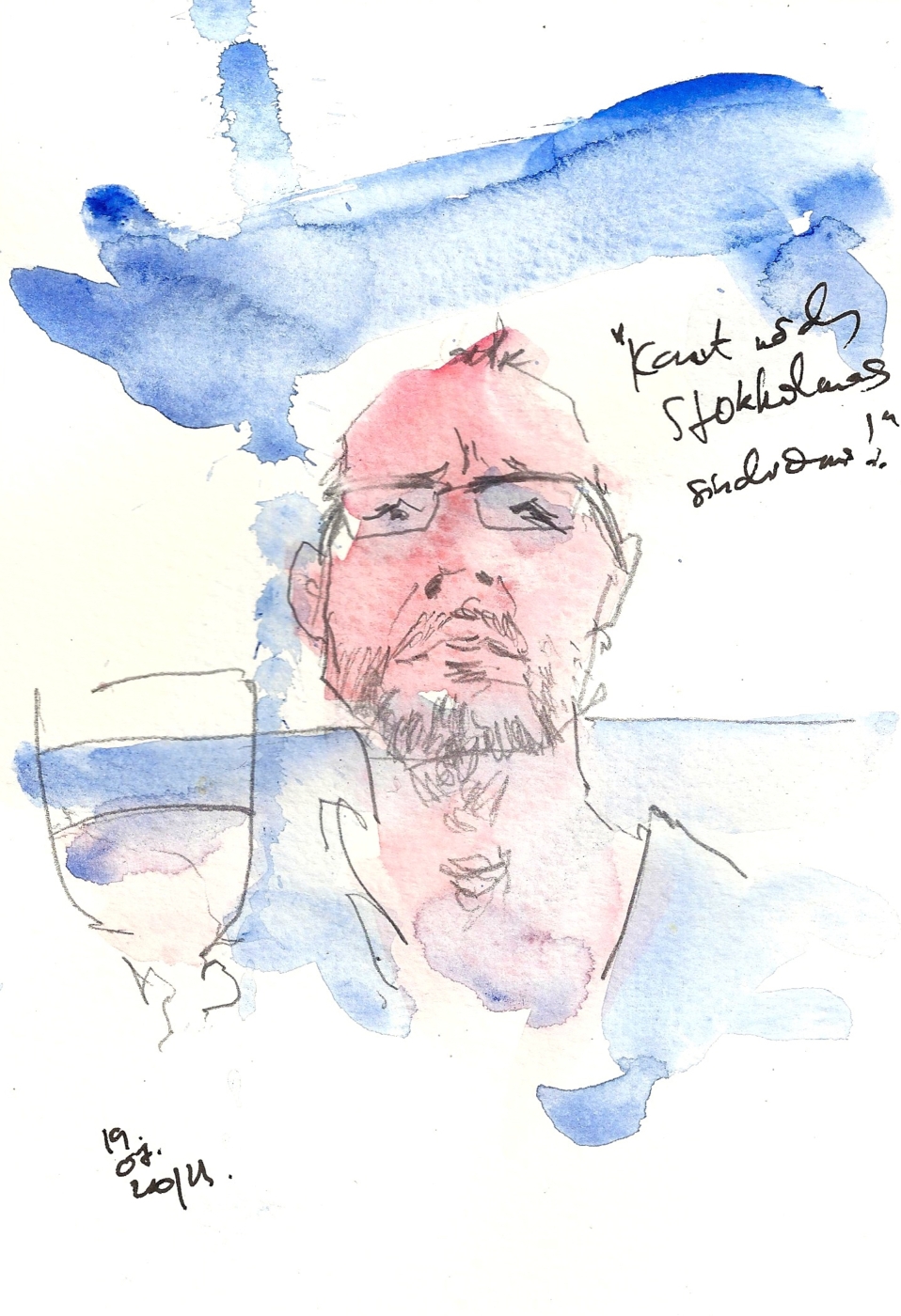 Some eight vine leaves had been nipped, washed, and put to boil in a saucepan filled with salted water. It was just the right moment to open a Prosecco, sit on the terrace, and listen to the wind breezing and sighing in the birch and aspen treetops. Suddenly, from behind the house came some shrill hoots.

– Can’t you see? Her baby is up there, in the rowan tree!

– Its mother is calling him back. Look at that hole she’s made in the roof!

– I think we’re getting Stockholm syndrome.

When choosing vine leaves for cooking, it’s best to look for ones that have not been damaged by worms or other pests. Avoid the dried-out or unattractive ones, as you’ll be the one enjoying them later. It’s equally important that the leaves are not too small – they need to be at least the size of a palm. Cut off the hard stalks of the leaves. It’s a pity that dock leaves are not as big. The reason to use vine leaves in cooking is that they have a delightful, natural acidity.

Make the stuffing: beef, beef plus pork, or pork mince (about two handfuls), half a handful of finely chopped chanterelles, a quarter of an onion, finely chopped, two to three cloves of finely chopped garlic, half (3-4cm) of a red hot chili pepper, also finely chopped, greens, any that you can get (for example: half a handful of rocket), two teaspoons of cumin seeds, a generous amount of ground black pepper and a bit of salt – according to taste  – and an egg. Mix everything together, fill the vine leaves with the stuffing, make the vine leaf rolls, place in the pan, and steam with the lid on. Best enjoyed with sour cream.

– Did you hear anything last night?

– No. Nothing this morning either.

– Nor during the day.

– Maybe, but perhaps last night it was just some kind of exercise. Just like birds, when they take their little ones from the nest, to teach them to fly.

– Maybe they’re stuffed with food, digesting it as they sleep. Muris wrote on Facebook that minks have brought him a deer’s leg.

When preparing a chanterelle soup, forget everything scornful that has been telling you not to boil these little mushrooms. You’ll need some smoked pork ribs (get them at major Latvian food stores, they usually come smutty black and seemingly inedible, as there is hardly any meat on them – you need about two pieces like that). You’ll also need one onion, one carrot, a piece of parsley root, a piece of celery, a whole garlic bulb (cut in half horizontally), a handful of chanterelles, salt, black pepper, seasoning, and bay leaves. Unlike with other meat soups, you do not need to remove the foam. Mind you, it’s not like there will be any from these little ribs anyway. Start boiling the ribs. On the pan (without oil or any other fat), fry a halved onion (brown the cut part), garlic, and the rest of the veggies. Add the mixture to the ribs. Add the spices. Be careful with salt – the ribs are already salty, so try not to overuse. Boil for about four hours on a low fire. Then, chop the other handful of chanterelles finely and fry in butter, adding some of the small pieces of bacon and the finely chopped onion. Add black pepper to taste. Heat the broth, taste, and add some salt if needed. If not needed, add something for acidity – a bit of lemon or lime juice will do the trick (but do it carefully, continuously tasting). Place the fried chanterelles on the plates, pour the broth over them, and sprinkle some chopped dill. Add sour cream if you wish. Eat. 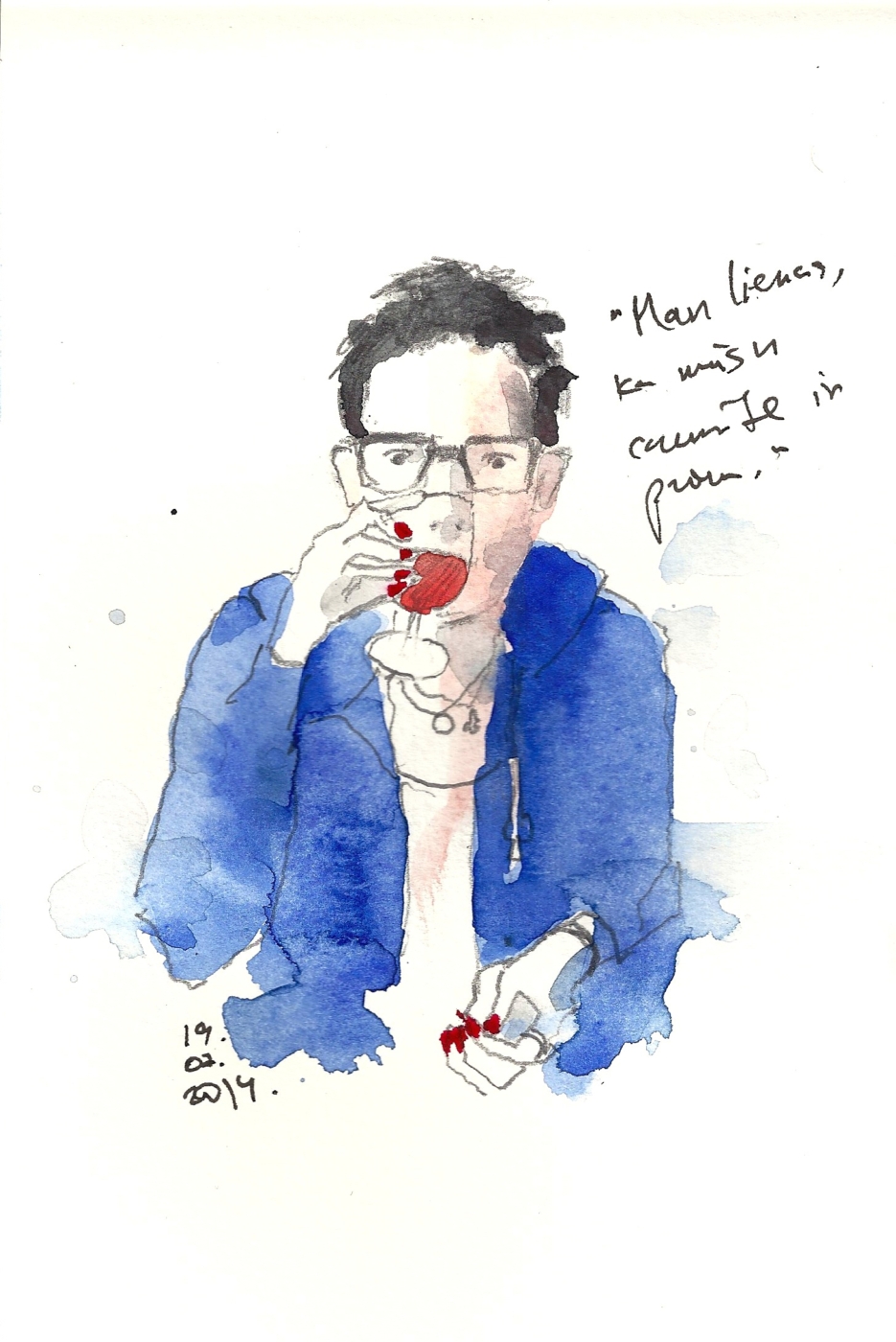 – Do you think she’ll come back?

– It’s a shame. What do we have left in the fridge?

– We should defrost the freezer. And eat last year’s mushrooms.

– What have we got in there?

– How much of the new ones have we got?

– We should make a soup from last year’s mushrooms.