Me as a kid belonging to the cult of chewing gum

Gum was not available and certainly not approved by the government.

The following story was originally published in Benji Knewman 8.

This research project emerged from my memories as a kid belonging to the cult of chewing gum in former Soviet countries in the beginning of the 1990s. Chewing gum was an almost unattainable object of luxury. Gum was chewed constantly. Before bedtime it was taken out of the mouth and left for the next day. This process continued for weeks, and often long after the taste had gone. This essay is my attempt to look back using chewing gum as a central theme to understand that specific time and place of my youth. 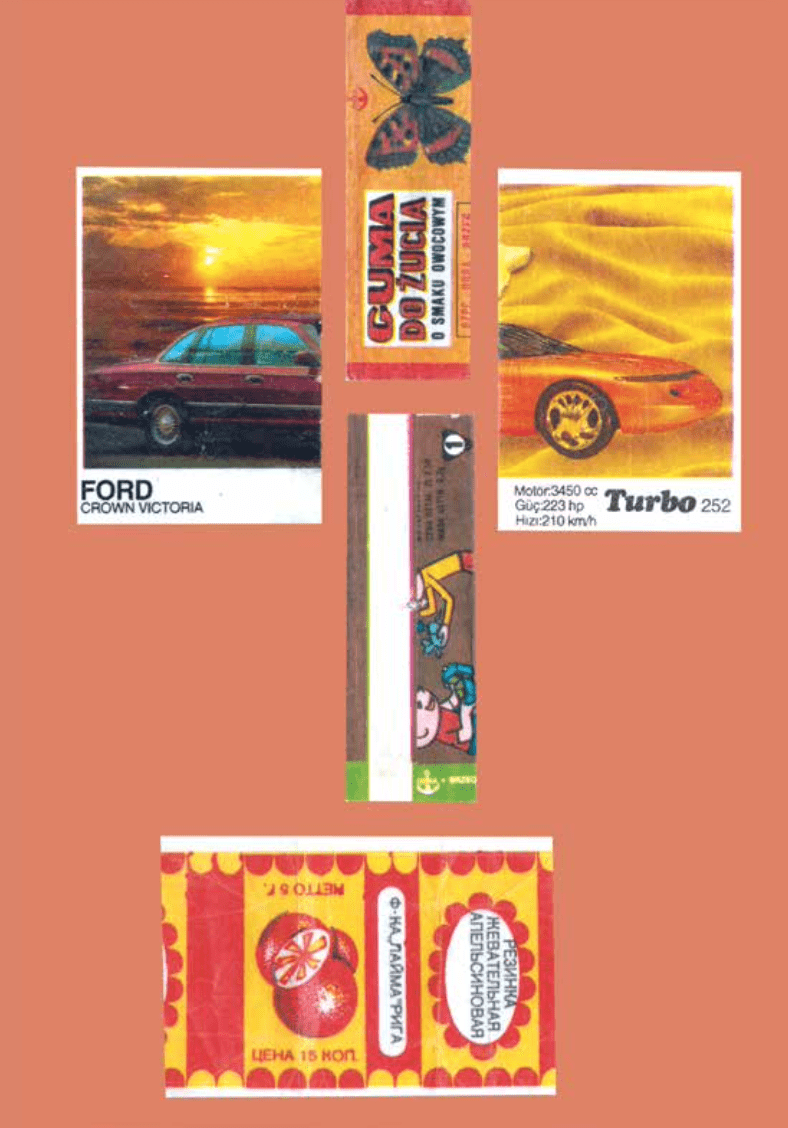 Stilyagi (“stylish-ers”) was a youth subculture in the 1950s and 1960s in the Soviet Union. It was characterized by flashy, bright clothes and the imitation of Western modes of behaviour, or, at least what were perceived as such. It was a protest against the uniform way of life and morals of the Soviet people.

The phenomenon and concept of the stilyagi first appeared in the 1950s when, after the dark days of Stalinism, the first glimmers of liberalization appeared in society. Some began to separate themselves from the masses by developing a special kind of vocabulary or jargon, one that is still used today. For example, the main streets were referred to as “brodvei” (or “brod,” from the American “broadway”); “kinut breik” meant going for a walk with a purpose, and showing oneself off.

The imitation of Western pop culture extended to chewing gum as well – gum was not available at that time and certainly not approved by the government, but youths developed a habit of moving their jaws from side to side to give the impression of chewing gum. They used their imagination to create an image in the spirit of stilyagi.

The first Soviet chewing gum was produced by the confectioner Kalev in Tallinn, Estonia, in 1968, and it was named Tiri-aga-tõmba. But before it could be released for public consumption, chewing gum was banned by a directive from Moscow. Russian academic Petrovsky concluded that it bred bad habits and, moreover, promoted the capitalist way of life and shallow thinking.

Blat. A reciprocal favour or currency that was highly valued in the Soviet system as a powerful tool for getting things done and working around bureaucracy (Russian)

Kalev was run by an extremely energetic director, Edda Vladimirovna Maurer, who was a member of the Soviet Women’s Committee. She took the initiative to use her “blat” to get through to Valentina Tereshkova, the first woman cosmonaut. Cosmonauts were well known to have problems with oral hygiene. Under weightless conditions toothpaste flew out of their mouths.

The factory’s managers succeeded in inviting the cosmonauts as guests, through the Central Committee of the Communist Party of Estonia, to visit the factory and try the chewing gum. Signing the guest book, cosmonaut Georgy Grechko expressed “special thanks for the gum”. After the visit, samples of Tiri-aga-tõmba were sent to the Soviet space laboratory. General V. Kustov, a doctor at the laboratory, noted in his report that gum “helps to equalize barometric pressure in the middle ear cavity during airplane take-offs and landings, reduces smoking by 26.4%, decreases drowsiness, and generally has a positive effect.” Thanks to Edda Vladimirovna Maurer’s ingenuity, Kalev produced the gum exclusively for Soviet cosmonauts for a number of years.

One day in 1975, Moscow’s Sokolniki Arena hosted 4000 spectators eager to see the Soviet junior ice hockey team play its Canadian counterpart. The Canadian team was sponsored by Wrigley’s chewing gum, which meant that Moscow’s schoolchildren were doubly excited for the game, as they hoped to get their hands on the unattainable gum.

During the game, Canadian fans threw gum and stickers into the stands reserved for local fans, but the Soviet soldiers and police present did not allow fans to approach or pick up the gifts.

A while after the match had ended, the administrator and an electrician at the arena wrongly assumed that all the spectators had left the building and turned off the lights. This was followed by chaos as the jostle for the thrown items among the spectators left behind in the arena turned into a stampede, leading to the deaths of 20 people and injuries to many.

Alexander Nazarov, then 15 years old, said of the ordeal, “I got lucky – me and two classmates were sitting in the third row, just opposite the Canadian players’ bench. All throughout the game Canadian fans threw chewing gum and stickers to kids. As there were soldiers and police on guard, no one was allowed to pick anything up. Foreign guests sat in the ninth row and we were also not allowed to approach them. The game ended with a score of 3:3 and as soon as the end-of-game signal rang, we rushed to the exit to see the Canadians leave for the bus, as there was a chance to get some goods.” This story was revealed by former Soviet hockey national team player Alexander Kozhevnikov in 1989. There are different sources of information about this tragedy and the facts vary slightly as it was never written about in the Soviet media or on the other side of the Iron Curtain.

Misha. Name of the 1980 Moscow Olympics mascot. Short for Mikhail; also a Russian term for a teddy bear.

In the mid-1970s, the newspaper Komsomolskaya Pravda openly called for the rapid completion of the first Soviet chewing gum factory in order to put an end to schoolchildren begging for gum outside hotels. The situation indeed started to change after the International Olympic Committee’s decision in 1976 to hold the 1980 Summer Olympic Games in Moscow. The Soviet government was determined to do its best to help foreign guests feel as comfortable as they were accustomed to in their homelands. This meant good transport, air conditioning, and familiar food and drink, which, of course, included gum.

Initially, they’d thought to import the gum, but after some consideration, the Ministry of Food Industry started chewing gum production in the USSR. That was the turning point.

Estonian gum triumphed in 1979, the year that Soviet troops invaded Afghanistan and before the Moscow Olympics. Four chewing gum production lines were purchased, one of which went to Rot-Front in Moscow, another to Leningrad, the third to Yerevan, and the fourth to Tallinn. Given that Kalev had already perfected gum production for the cosmonauts, Estonian gum ended up capturing more than half of the Soviet market. At first, gum was produced in the tradition of the Soviet approach to products. Orange-flavoured gum had a drawing of an orange on the packaging and was called “orange chewing gum.”

Along with the Olympics, other manifestations of so-called bourgeois life came to the USSR from behind the Iron Curtain and settled there. Soviet consumers unspoiled by abundance discovered Coca-Cola, ketchup, disposable plastic utensils, sneakers, and chewing gum. However, Soviet gum still wasn’t the exotic, colourful foreign gum craved by Soviet kids: foreign gum didn’t lose its taste and dissolve in one’s mouth instantly. 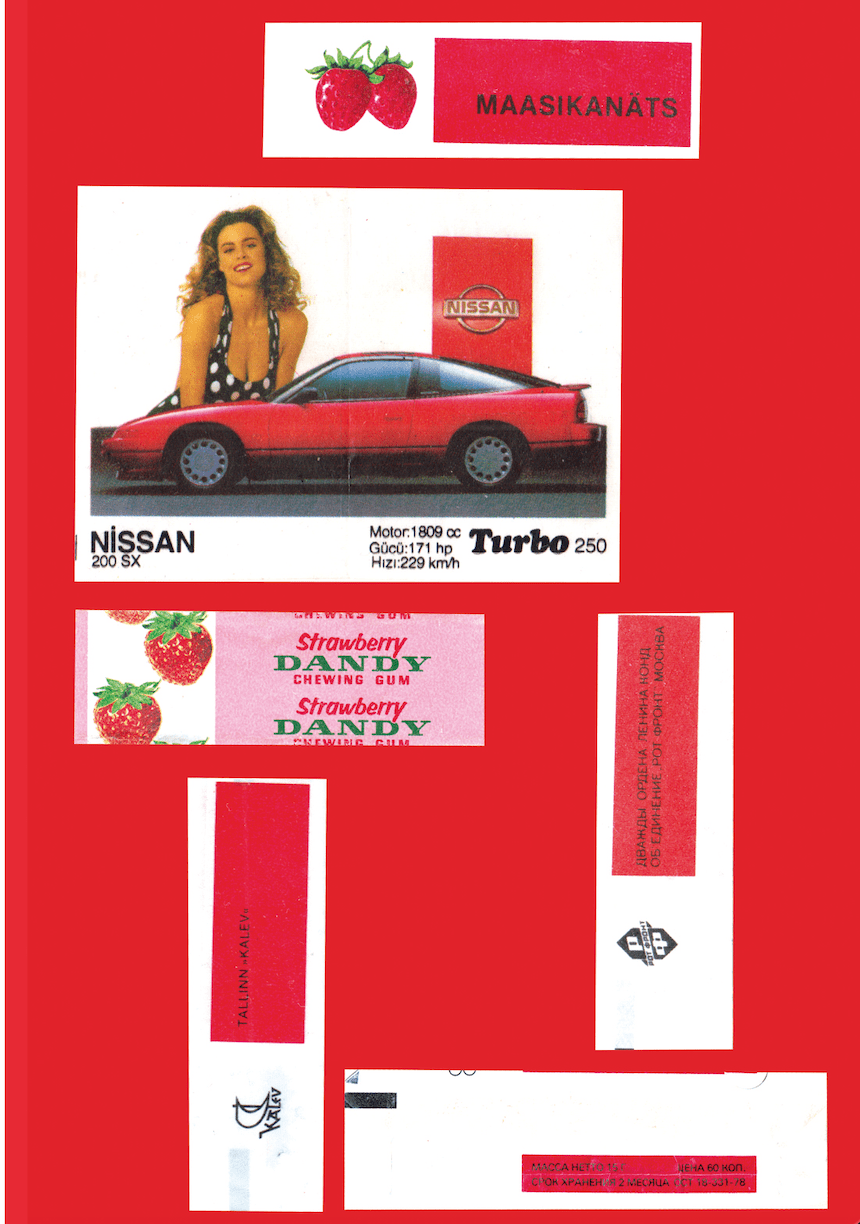 The 1980 Olympic Games in Moscow are remembered for widespread steroid consumption in addition to  competition between the Soviet Union and other countries.

Dr. Moris Silber described a sports espionage episode during the Games: “When I was on the Soviet [Olympic medical team], the East German sprinters were all huge guys. Our champion was a small guy. Very strong, but small. During a meeting, we asked the KGB agents who were working with our team to find out about the East German team’s diet, to help us convince the vice chairman of the Soviet Olympics Committee that we needed to improve our athletes’ protein-to-carbohydrate ratio. At the time, we could change nothing without approval. The KGB agents went to the hotel where the East Germans were staying and got their entire menu and diet protocol from the chef there. That helped us a lot.”

The Tom Clancy-like Olympics tales involving Soviets weren’t limited simply to performance enhancement in the athletic arena. Dr. Silber also said that at one point, he was tasked with inventing gum that would negate the effects of a hangover. “We made chewing gum filled with various bioactive substances,” he explained.

After Gorbachev enacted glasnost and perestroika at the end of 1980s, the Soviet Union collapsed. At the end of 1991, the year the Soviet Union ceased to be, gum production in Russia and most of the other republics was considerably reduced or terminated due to the economic crisis; to date, it has not returned to pre-1991 levels. The one exception to this is Kalev in Tallinn. It is the only company started in the Soviet era that continues to produce chewing gum to this day.

Between 1992 and 1996, all the gum factories in Russia were shut down. The period of “shuttles,” or individual traders, began as people were allowed to travel abroad more easily. Those traders, many of them jobless women, visited Turkey and China sometimes as frequently as 20 times a year, to purchase cheap clothes, cosmetics, sweets, and other goods to be re-sold at countless kiosks throughout the whole country. Canned beer, filtered cigarettes, pantyhose, audiotapes as well as chewing gum were sold at every corner.

The chewing gum Turbo, produced by the Turkish company Kent, was introduced to the Soviet (and post-Soviet) public in the late 1980s and beginning of the 1990s, during the region’s economic crisis and transformation from a totalitarian state in ruins to a consumer culture in disarray. This shift influenced the chewing gum market quite visibly, as most of the Soviet factories closed down and gum brands from Turkey, Pakistan, and Syria flooded the market in their slick and colourful plastic wrappers. The sentimental, straightforward, and simple aesthetics of Soviet gum were no more. Brands now used sophisticated tools to create desire and emotional engagement. The extremely colourful and, for Soviet kids, highly attractive packaging of Turbo is a very strong example of this shift in aesthetics and marketing.

Collectable images of cars were soon introduced to gum packaging.

Cars of utter luxury, with impressive statistics showing maximum speed, engine size, and capacity, filled the pockets of children in a flash. Instantly the cards became status symbols for children and were played with, traded, and gambled in schools on a frequent basis.

Chewing gum and the car as a collected image of desire are strong cultural markers of how the many now-independent and not-so-independent countries of the former Soviet Union have changed.